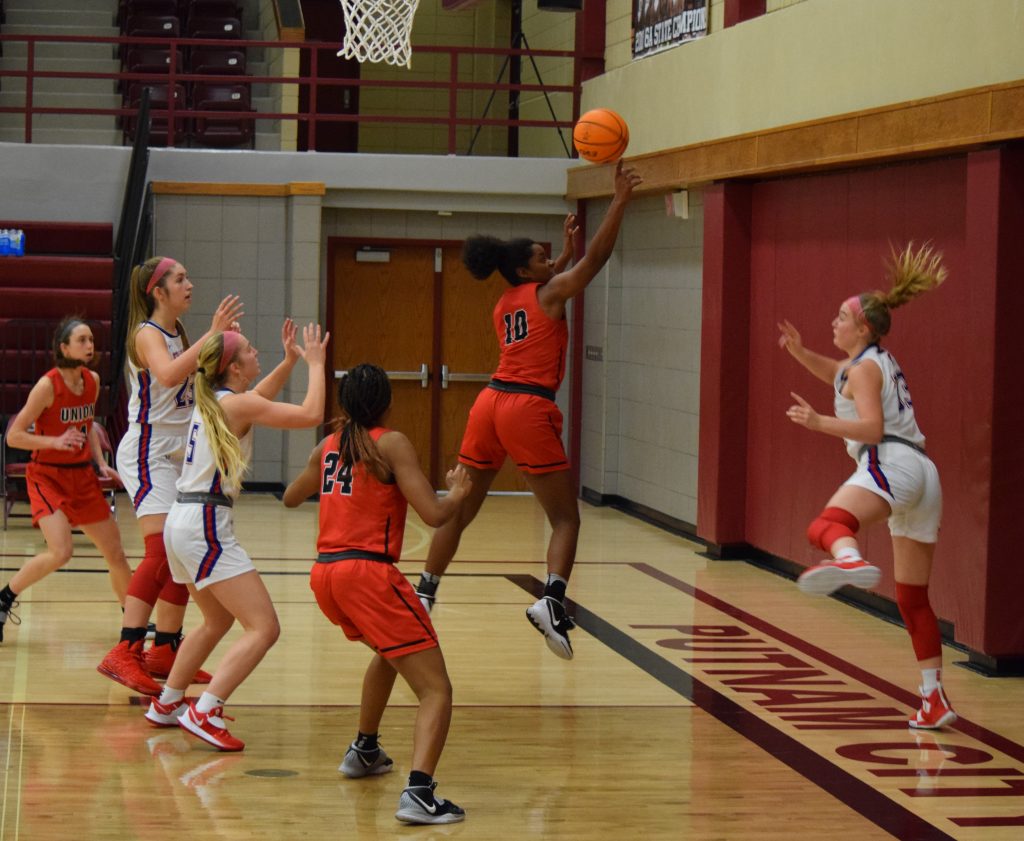 In a competitive back-and-forth battle, Bixby’s final second field goal attempted bounced away as the ninth-ranked Lady Spartans, now 8-4 on the season, were edged by third-ranked Union, 47-45, in the title game played in Putnam City North’s field house.

Bixby’s impressive week began Tuesday, Jan. 5, as the Lady Spartans pulled away late to upend No. 13 Sand Springs, 53-44, at home. En route to a berth in the Putnam City tourney finals, Bixby upended No. 7 Putnam City North, 64-53, in the tourney opener while handing No. 2 Moore its first loss, 59-53, in the semifinals last Friday.

“I’m pleased by our progression … we improved every game. Even that game made us better,” Lady Spartan head coach Tina Thomas said after the loss to Union. “It just shows us that we can compete with the best if we keep grinding and working. At the end of the season anything is possible.

“I told them that as disappointing as this loss is for us, we’re going to go back, break it down and learn from it. We are going to get better … they compete hard but there were some things that did not go well that we can correct. I feel good about our growth and our balance. We had a different person lead us in scoring every game.”

Five points by sophomore Gracy Wernli, four from sophomore Alyssa Nielsen and two by sophomore Meredith Mayes gave Bixby an early 9-4 lead against unbeaten Union before UHS rallied for a 10-9 lead after one quarter.

With the game tied at 19-all, Union received a pair of technical fouls on center Sydni Smith, who was ejected. Wernli sank all four technical free throws giving Bixby a 23-19 lead with 2:30 left until halftime.

Union, 9-0, held a 37-35 late lead before Mayes scored on a bank shot with 58 seconds left to tie the game at 37-37 entering the fourth quarter. Mayes scored eight points in the third period.

Union’s Kaylen Nelson, the tourney’s Most Valuable Player, sank two free throws with 27 second left for a 47-43 UHS lead before Bixby’s Bradley scored on a drive to make it 47-45 with 10 seconds left. Union missed the front end of a one-and-one attempt with six seconds left with Mayes grabbing the rebound as Bixby called timeout with 2.7 seconds showing.

The Spartans got the ball inside to Mayes but her field goal attempt, which was aggressively contested, bounced off the rim at the buzzer.

Wernli led Bixby’s scoring effort with 20 points, sinking three treys and going 5-for-5 at the charity stripe. With a strong second-half showing, Mayes finished with 12 points.

“I was beyond proud of us. Our energy and hustle this weekend has never been like that … it was incredible how we didn’t let any numbers (rankings) worry us and we beat two really good teams and our last game was really close,” said Wernli, who was named all-tournament along with teammate Bradley.

“I think we learned from last week (Mustang Tournament) that energy was the biggest thing and everyone on the team brought the energy this week … it’s so much fun to play that way. Union is very tough defensively, they play tight.”

In the first-round game with PC North, Bixby overcame a first quarter deficit and took the lead after outscoring the Lady Panthers, 22-5, in the third quarter in capturing the impressive win. Nielsen led the balanced BHS attack with 17 points, followed by Mayes with 16 and Wernli with 14.

Against previously unbeaten Moore in the semifinals, Bixby again used a strong third period showing to take the lead and made key plays down the stretch to topple the Lady Lions, who are now 6-1. Bradley’s 18 points led Bixby in scoring, followed by Wernli with 17 and Gentry Baldwin with 14.

“We are going to get better … they competed hard but there were some things that didn’t go well that we can correct,” coach Thomas added. “Union is a good team and they’re well coached. I feel good about our growth and balance. We had a different person lead us in scoring every game.”

NOTEBOOK – Bixby returns home to host Frontier Valley Conference rival Owasso on Tuesday, Jan. 12, starting at 6:30 p.m. before visiting Class 5A’s top-ranked Sapulpa on Friday, Jan. 15. On being named all-tournament, Wernli said, “I was glad to make all-tournament… I appreciated it.” It was the second all-tourney honor for Bradley this season. … In three of the four games Bixby played last week, the Lady Spartans had three players score in double figures. … Bradley scored a career-high 23 points in Bixby’s win over Sand Springs early last week as the Lady Spartans broke away from a 32-all tie midway through the third quarter to seize control of the game. Nielsen contributed 11 points in the game and Wernli chipped in with 20. … There is a refurbished look inside Bixby’s Whitey Ford Field House, including new flooring, painting and other noticeable improvements.