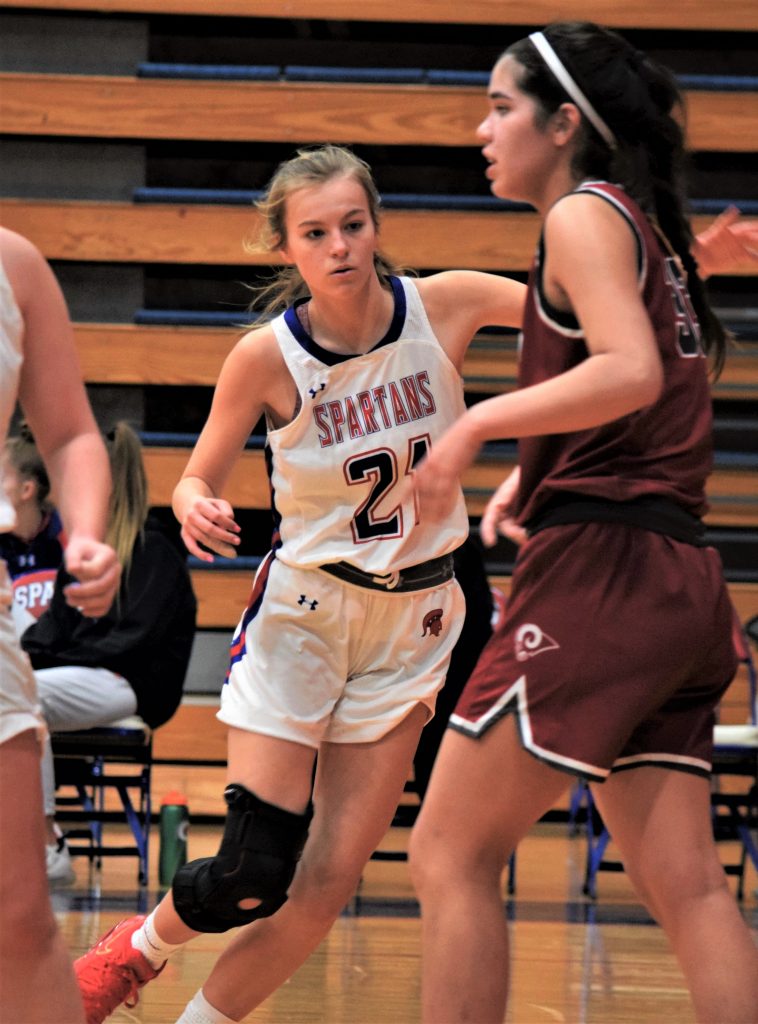 Adjusting when moving to a new high school during one’s senior year is difficult, at best.

But, moving to a different school during the uncertainty created by the coronavirus pandemic compounds the difficulty as Bixby High’s 5-7 senior guard Parker Brown learned after moving prior to the start of this school year.

“It was very difficult moving, especially since it was my senior year and because of COVID. I hadn’t been able to make as many friends as I could have since we haven’t been in school, because of going virtual,” Brown, the daughter of Aubrey Brown and Jerry and Kristen Brown, said before a recent practice.

“My parents told me I could live in Bixby and still drive to school in Skiatook, but I just felt like I should start new, I don’t know why but it was something I wanted to try out and I’ve liked it,” she said. “It’s been difficult because I had to quarantine a time or two and we were in school one week and virtual the next.”

Basketball, the sport Brown has played since she was in second grade – being coached by her dad until starting school ball in the seventh grade – helped ease the transition and contributed to her positive adjustment. She was accepted by the girls on the team and the coaching staff.

“I played at Skiatook, but we didn’t have a lot of success. Bixby’s program has been successful and it’s exciting getting to experience the success with this group of girls,” said Brown, who has seen limited varsity playing time recently. “I enjoy being a part of this team. It was so exciting when we beat Sapulpa. I knew it was a rivalry.

“I was nervous that I was going to be the new girl, and everyone was going to hate me. But they took me in … I feel comfortable now. Without basketball it would have been much tougher because I wouldn’t have known anyone.”

Transitioning to a new school wasn’t the only obstacle Brown faced. In November she suffered a knee injury, which kept her from practices and scrimmages, critical steps for a program newcomer.

“I was told at first that it was my ACL (anterior cruciate ligament) and I was even prepped for surgery but then some tests came back and I was told that it was just a bad sprain. I’ve spent most of my time recovering and doing physical therapy,” said Brown.

“Parker fits in good with our kids. She had some unfortunate luck getting injured at first so we’re getting her back and trying to get her in a groove,” Lady Spartan head coach Tina Thomas said. “You hate to see that happen to any kid.”

Brown admits to feeling almost recovered and is slowly working into shape while also spending time learning the Lady Spartans’ playbook. It’s been a work in progress.

“I played in one game recently, which was my first game, and I went for a ball on the floor and hit my knee and I thought ‘oh no’. That was before I got my brace,” Brown said.; “The coaches are very supportive and are always checking on me and making sure my knee is okay.”

When not on the court, Brown is taking a Bixby class while also taking classes at Tulsa Community College. She aspires to work with young kids in the future, as a teacher or as a nurse practitioner in a children’s hospital.

“I have six younger siblings and I’ve taken care of them a lot. I like helping them, so that made me think I’d like helping other kids,” she said.

For now, the personable Brown continues working to improve her physical condition, absorbing the Lady Spartan playbook and contributing to the team’s success any way possible.

“Parker brings a lot of energy. She is a good kid who works hard. I think basketball has given her a connection here … we’re glad to have her,” coach Thomas added.