When in doubt, play defense. That was the approach by Bixby High’s Lady Spartans against visiting Jenks Friday night in Whitey Ford Field House.

While shots weren’t falling early in the Frontier Valley Conference clash, Bixby turned up the defensive intensity, limiting the Lady Trojans offensively while forcing a barrage of turnovers.

When the offense arrived later in the opening quarter, the sixth-ranked Lady Spartans erupted to celebrate Senior Night with their second win of the season over the Lady Trojans, 66-24. It was Bixby’s second win of the week.

The Lady Spartans, 14-4 overall and 8-1 in conference play, continued their winning ways this past Tuesday, Feb. 2, with a solid first half performance en route to a 50-31 victory at Muskogee.

“We weren’t shooting great at the start of the game, but their defensive energy carried over with some steals and some easy baskets that gets you going and loosens everything up,” Lady Spartan head coach Tina Thomas said after the Jenks win.

“It was great to get some of those kids off the bench a lot of playing time in this game. I’m really proud of the girls and proud of the seniors for all their contributions to our program. I wish them all well. It was a good Senior Night … but we’ve got a lot of big games coming up.” 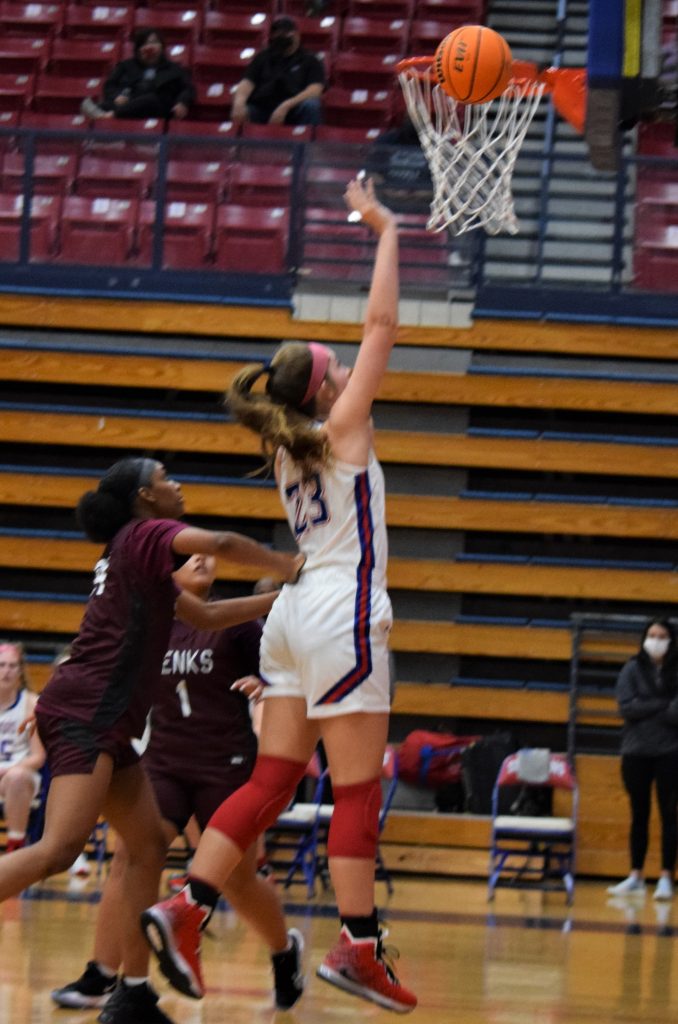 Back-to-back three-pointers by Wernli and senior guard Kate Bradley gave Bixby a 19-7 lead with 6:32 left in the second quarter before the Lady Trojans’ K. Brown sank a three-pointer – Jenks only points in the second stanza – to make it a 19-7 game with 6:06 left.

The Lady Spartans scored 18 consecutive points the remainder of the second period to grab a 37-7 halftime lead. Wernli and Bradley each scored 10 first half points. During the 18-0 run, Bradley and Wernli scored seven points each while sophomore forward Meredith Mayes and senior guard Jyllian Mays each scored two points.

“We definitely needed to pick up the tempo on the defensive end and I think we did that … we knew the shots would fall,” said the reliable Bradley. “I never realized how much it (Senior Night) would mean and how fun it was getting to watch everyone play tonight, everyone played lights out to get this win. It has gone by fast … it seems like yesterday I was a freshman.”

“It was great getting to play as much as I did … I thought I played well, I didn’t want to disappoint anyone,” said senior J. Mays, who drained a pair of treys. “My freshman year I remember thinking these four years will take forever but now it’s here and it’s flown by.”

At Muskogee, the Lady Spartans were led in scoring by forwards Nielsen and Mayes with 15 and 14 points, respectively.

NOTEBOOK – Bixby’s scheduled home game with Bartlesville Tuesday, Feb. 9, has been cancelled. The Lady Spartans return to action Friday, Feb. 12 at Sand Springs. … The Lady Spartans are on six-game winning streak … Bixby’s senior boys’ and girls’ basketball players were honored along with their parents and family in between the two Jenks games last Friday. “It was amazing, I loved every second I got on the court,” said senior Parker Brown, playing her first season in a Lady Spartan uniform while overcoming an early-season knee injury. “I got tired but that was to be expected but I think I played pretty well. I started to get with the flow. It was a very emotional night. It just came up out of nowhere. I wasn’t expecting it to be this hard, but it was.”