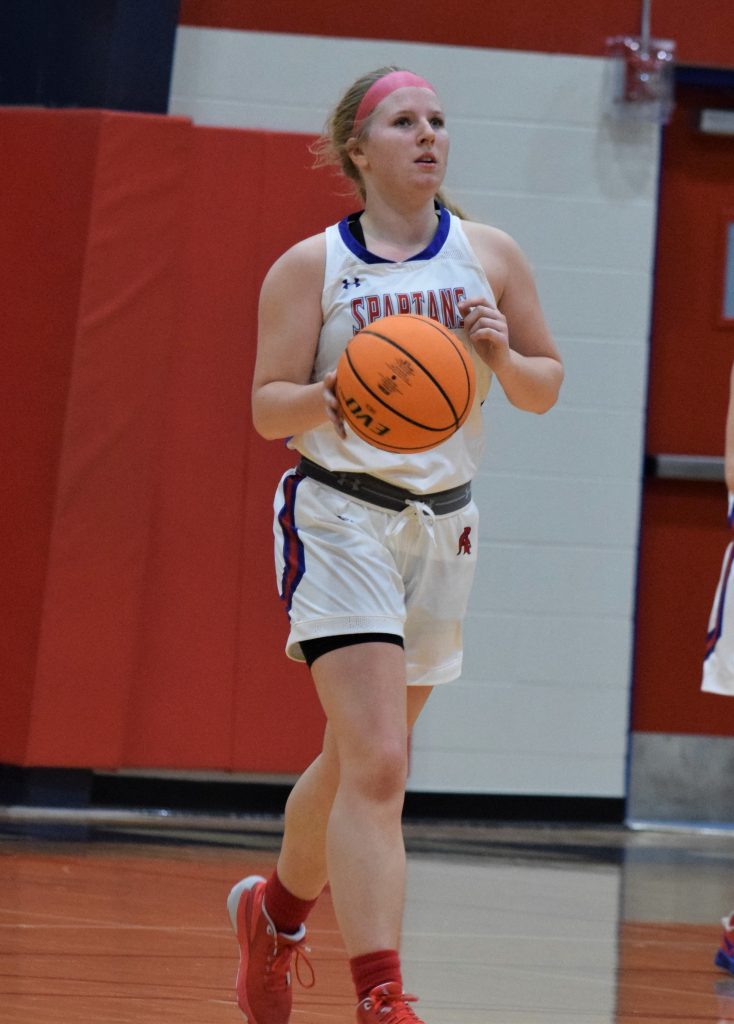 “This season has been weird for us because we have a different mindset when it comes to game day. When games are cancelled because of COVID it messes everything up,” said Mays, who moved from Ft. Smith, Arkansas to Bixby when she was a second-grader. “I think we’ve handled it pretty well.”

“We were pleased we were getting to host. It was especially nice for me, Parker (Brown) and Kate (Bradley) since we are seniors,” Mays said. “I feel like we have a shot to make it to the state tournament, which would be nice.”

Mays, the daughter of Tom and Allyson Mays, displayed impressive accuracy shooting from three-point range during her career and became a valued contributor off the bench for the Lady Spartans. But her contributions extended beyond the court.

“Jyllian brings fun to our team,” said Bixby head coach Tina Thomas. “She is bubbly and has a great sense of humor that makes her fun to be around. I’m proud that she has battled through health problems and injuries to be a part of this group and contribute to the teams’ success. She has taken on the role as spiritual leader.”

Mays agrees. “I feel like that’s always been my role on the team. I’m not a physical leader like Kate but everyone knows me as someone who supports everyone. We know we always have each other’s back, which, I think, is very important. We support the girls on the court by getting everyone on the bench involved.”

Sadly, Mays senior season took a heart-breaking turn last week. During a practice, she suffered a broken finger on her left hand. Surgery is likely in her future and her ability to contribute to the Lady Spartans on the court has ended.

“I broke my little finger. I tried to play on it, but I just couldn’t … it’s getting worse. So right now, it looks like I’m out for the rest of the season,” Mays said. “It was an emotional time for me. All the girls came up and hugged me and felt so bad for me.

“I had three weeks left in the season and when I was told I couldn’t play it was heartbreaking. I plan to be there supporting the girls as much as I can,” she added.

Mays also received support from her close-knit family. Her older sister, Makailyn, understands what Jyllian is experiencing as she injured a knee during her senior softball season with the Lady Spartans.

“I was talking with my sister the other day about her being injured. My family is important to me … we do everything together. We have a family night and love being around each other. It was emotional for me on Senior Night when they all were there to support me,” Mays said.

Jyllian’s senior season has been different than others in her past because her identical twin sister Jynell decided not to play this season.

“We played together since we were three years old until last year. This is the first year we haven’t played together,” Mays said. “It was really weird at first. I always knew where she was going on the court and she always knew what I was thinking. Seeing her in the stands at our games was different.”

When her senior year ends, Mays plans to attend Tulsa Community College for two years and then possibly attend Oklahoma State. Her long-term goal is to open her own bakery.

“That’s something that’s always been in the back of my mind. During the quarantine, I experimented with a lot of recipes. It’s something I’m really passionate about,” she noted.

Mays is also passionate about Lady Spartan basketball. Even though disappointed that an injury keeps her from contributing on the court during the playoffs, she remains determined to lend her vocal support like always.