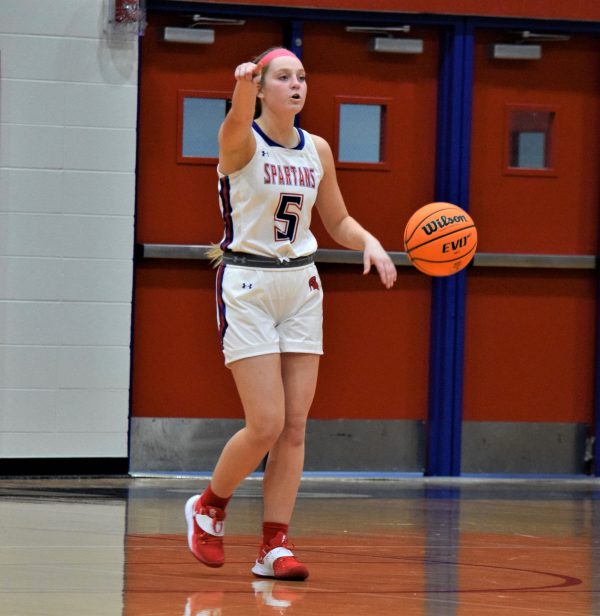 As a youngster, Bradley participated in a variety of sports – whatever sport was in season – and, by her own admission, she didn’t accept losing.

“Growing up I tried just about everything. I danced. I did soccer, swimming, softball, basketball … I tried every single sport growing up. I’m glad I participated in other sports,” said Bradley, the daughter of Mike and Stephanie Bradley. “Being competitive has been my nature since I was born. I hated to lose. I was that kid crying after a loss.

“And I had my brother (Jack) who was also very competitive, so I had childhood competition with him. He is three years older. He would always ask me to race and then he’d beat me and make me mad. He really did toughen me up. He made me mad, but he made me strive to get better,” she noted.

Bradley became a three-sport athlete as a Lady Spartan – competing in fast-pitch softball, basketball and in track. She excelled in each sport, earning all-state honors in softball as a senior. She plans to bypass track this season while preparing for college.

Bradley suited up as a freshman on Bixby’s girls’ basketball team which qualified for the state tournament. She didn’t play alot but enjoyed the experience. She entered Bixby’s starting lineup as a sophomore and has steadily improved and evolved into a leadership role during her junior season.

With a starting lineup featuring four sophomores this season, Bradley has accepted the leadership role this season as the veteran starter on the squad.

“I was more of an example leader when I was younger, but I was told I needed to be more of a vocal leader on the floor,” Bradley said. “I definitely think as a senior I’ve been able to step up and take that role more. I tried to lead but not be controlling. We’re equals on the court, but I have more experience … it’s come more natural for me being a senior.”

Her leadership is appreciated by Bixby’s coaching staff. “Kate is a coach’s dream. Her incredible work ethic is second to none,” Lady Spartan head coach Tina Thomas said. “She’s demonstrated great leadership and poise throughout the season. She leads both on the court and off.

“She is mindful to recognize the great contribution of all her teammates and makes sure all are included. She is humble but a true competitor. I expect her leadership to continue with even more resolve.”

Bradley has compiled consistent statistics during her final season with the Lady Spartans. She is averaging 12.7 points per game, 4.6 rebounds per game and 3.8 assists a game. She is averaging 38 percent on field goal attempts, 40 percent from three-point range and 75 percent at the free throw line.

Bradley believes an area where she has improved during her Bixby career is with her confidence. “The most noticeable thing about my game has been confidence. I’ve had teammates that always believed in me when I didn’t believe in myself.

“I began to see it my junior year and now in my senior year. I’m shooting with more confidence. I’m not second-guessing what I’m doing … that’s where I’ve seen growth. I know the girls have my back and I have their support.”

Bixby’s girls struggled early in the season before going on a winning streak finishing the regular season and into the state playoffs. The Lady Spartans won a regional championship and regrouped after an Area Tournament loss to capture a victory in the recent Area Consolation Finals to return to the Class 6A State Tournament for the first time in four years.

Sixth-ranked Bixby meets fourth-ranked Choctaw in the state quarterfinals at 4 p.m. Thursday (March 11) at Sapulpa’s Field House. It’s an exciting time for the Lady Spartans and their followers.

“I was really positive about this team from the start, but we definitely had some tough games,” Bradley noted. “We didn’t perform at all at the Mustang Tournament early in the season but then we go to the Putnam City Tournament and there was a total change … we beat some good teams.

“We beat Moore, which was undefeated at the time, we beat Putnam North which is in the state tournament and we lost to Union in the finals. For me, getting to state was definitely a goal, there was never any doubt in my mind that we would make it because of our work ethic … we work as hard as anybody. I’ve been confident in this team all year. It was exciting going to state as a freshman but there was no pressure on me then. It’s different when you are a senior and considered a leader.

“At this point it doesn’t matter who we play. We scrimmaged Choctaw early and have an idea what they do but we’re a different team from then … every team is better at the end of the year,” she noted.

Bradley, like the other Lady Spartans and other state teams feel blessed to still be playing during these uncertain pandemic times. At this time last year, teams preparing to play in the state tournament had their dreams dashed when the coronavirus basically ended the school year.

“I was terrified how this year would go,” Bradley admitted. “I felt like we’ve been walking on eggshells ever since softball started. We were doing everything we could to avoid being in quarantine and then we get to basketball and we continue doing everything to avoid quarantine. It’s definitely more pressure than we needed.”

When this week ends, so will Bradley’s high school athletic career. Competition remains in her future as she signed to play collegiate basketball at Oklahoma Christian University in Edmond. She had other options, but Oklahoma Christian was the right fit.

“I at one point thought I’d go somewhere else. But when OC came along later, and I went there for a visit, I became really excited. I liked the coach … she was so positive. It felt like home,” said Bradley, who plans to study forensic science.”

Her future is bright. OC is getting a competitor and a leader. Bradley, however, isn’t looking past this weekend, her final in a Lady Spartan uniform.

“The excitement is overtaking the sadness right now that I only have three games left. I can’t say we’ll get them next year because I won’t have that time. It’s sad but it’s also thrilling right now,” she said.