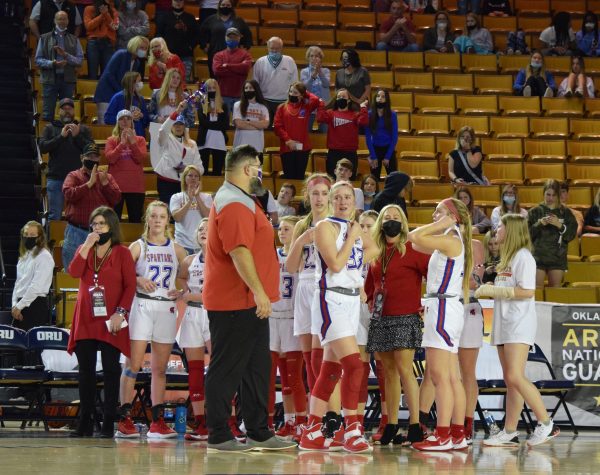 That is the caliber of team it took to disrupt the late season surge by Bixby’s youthful Lady Spartans. The sixth-ranked BHS girls defeated the No. 4 team (Choctaw) and the No. 2 team (Edmond North) in the state quarterfinals and state semifinals, respectively. No. 1 ranked Norman, however, had too many weapons.

Norman’s experience and tenacity were keys in the Lady Tigers’ third quarter outburst which provided separation from the Lady Spartans, who battled throughout before falling, 48-37, in the Class 6A Girls State Championship game at Oral Roberts University’s Mabee Center Saturday afternoon.

Norman held an 11-8 first quarter lead and the Lady Spartans remained in contention despite trailing 21-17 at halftime. But, a third quarter eruption, led by Oklahoma signee Kelbie Washington, resulted in a 15-4 scoring advantage for NHS and a 36-21 lead entering the fourth quarter.

Bixby, normally an efficient offensive unit, went 15-for-35 from the field and 1-of-10 on three-point attempts. The Lady Spartans were perfect from the line (6-for-6) and out-rebounded the Lady Tigers, 25-21.

The Lady Spartans shot the ball extremely well during the state tournament run and overcame halftime deficits against Choctaw and in the semifinals against Edmond North.

“They just shut us down … it was their tenacious defense,” Lady Spartan head coach Tina Thomas said. “Norman is a great team, they’re undefeated for a reason. We had trouble overcoming the physicality of the game.

“My girls battled. They could have laid down because we struggled coming out in the second half, but they kept battling. These girls have the heart of a champion and they are resilient. Through COVID they found a way to get better. Every obstacle that came their way they just hurdled it like the champions they are,” she added.

“They played high pressure defense and we struggled with it. We fought the whole game … but we came up a little short today. We’ll learn from this,” said Nielsen, who ended with four rebounds and two assists.

It was a disappointing loss for the Lady Spartans, but the future remains bright with four starters returning next season.

“They were hitting their shots and we weren’t,” said Bradley, the acknowledged team leader the past two seasons. “Getting here is huge. I’m so proud of this team … I’m not disappointed. They’ll be back here, and they’ll win it. And I’ll be watching and cheering them on.”

Bixby and Choctaw battled on even terms throughout the first half with the Lady Yellowjackets holding a 27-26 lead at halftime of the Class 6A state quarterfinal.

The Lady Spartans caught fire in the third quarter, going on a 17-0 run to capture a 43-27 lead with 2:17 left in the stanza. Sophomore guard Gracy Wernli continued her deadly shooting from outside by draining three straight three-pointers during the surge.

Choctaw narrowed the gap to 43-32 going into the fourth quarter but a layup by sophomore guard Gentry Baldwin and a three-pointer by Bradley lifted BHS to a 48-32 lead at the 6:13 mark.

After Choctaw rallied to make it a nine-point (48-39) game with 3:45 remaining, Wernli sank another trey and Wernli, Bradley and Baldwin combined to hit 10 free throws in the final 2:22 for the 61-39 victory – Bixby’s first state tournament win since 2013.

“We always say the first three minutes of the second half sets the tone and they answered the call tonight,” coach Thomas said. “We made an adjustment on defense which helped us. These girls prepared all year for this moment.

“There is nothing to simulate the energy from being in the state tournament. You try to prepare them for that, but you have to experience it,” she noted.

Wernli led BHS in scoring with 26 points including seven 3-pointers – both career highs. She credited the energy from the large Bixby crowd.

“I felt it after I hit the first shot. I felt the energy from the start … I felt it from our fans and from our bench. It was amazing,” said Wernli. “I’ve never experienced anything like that before. We feed off that, it makes us much more ready to play.

“Their shooters were great, and they did a good job rebounding but we knew what we needed to do … we all came together to get the win. We did not want to go home.”

Baldwin finished with 12 points while Nielsen scored 10 – seven in a strong first half performance.

“The energy was different than anything I’ve experienced. They were strong inside, but I felt like me and Meredith (Mayes) worked well together,” said Nielsen. “We went into a defense in the second half that forced them to rush their shots. We hit our first couple of shots in the third quarter and it got us going.”

Talented Edmond North put pressure on Bixby from the outset with their attacking offense, rushing out to an 11-7 first quarter lead. The Lady Spartans settled down in the second quarter battling the Lady Huskies on even terms before North freshman Allison Heathcock sank a three-pointer with one second left giving her team a 25-24 halftime lead.

North, which hit only three-of-nine first half free throw attempts, used a drive by Elle Papahronis and a three-pointer by Heathcock to lead 30-27 before Bixby responded with seven straight points – five by Baldwin and two by Nielsen – to lead 34-30 with 3:20 left in the third quarter.

Bradley scored five straight points to ignite a 10-4 run by the Lady Spartans for a 51-41 lead with 4:37 left. Wernli sank a three-pointer and Mayes scored from in close during the run.

The game remained up for grabs late when North narrowed the deficit to 53-52 before Bradley and Baldwin sank two free throws each for a 57-52 lead with 26 seconds left.

North’s Toni Papahronis, who missed a layup with 30 seconds left, scored on a drive with 22.9 seconds left but missed a free throw for a possible three-point play making it a 53-49 game. Bixby’s Nielsen broke free for an uncontested layup with 13.4 seconds left to seal the win.

“I had shown our girls seven clips for North games with the note stop transition after each one. I thought the girls buckled down. I thought Meredith did a really good job on defense. We had a really good balance with our inside and outside game and Alyssa rebounded the best she has all season,” coach Thomas said.

“We were a little sluggish offensively at the start. We made some mistakes, and we didn’t want to spread it out that early late in the game, but the nature of the defense forced us.”

All five Lady Spartan starters finished in double figures with Bradley leading the way with 15 points followed by Baldwin and Wernli with 12 each and Mayes and Nielsen with 10 points each. Mayes was credited with 13 rebounds and Nielsen with 11 for her first double-double this season.

“I think everyone kept their composure, there was never a doubt in any of our minds that we weren’t going to win,” Bradley said. “You just trust in your teammates and know that you’ll get a stop when you need to … we believed in each other.

“It’s incredible going to the state finals … I’m at a loss for words. I’m savoring every moment,” the talented senior added.

NOTABLES – Bixby won eight games in a row late in the regular season and ended the season winning 11 of its last 13 games. … Bixby made its first state tournament appearance since 2017 and the second under head coach Tina Thomas.  The Lady Spartans were attempting to win the school’s first state title since 1957. … In three state tourney games, Wernli averaged 14.3 points per game, Nielsen averaged 12.0 and Bradley averaged 10.0. …